The millennials' rut: Why it costs all of us

Millennials are suffering under current economic conditions. That should worry everyone.

They're called the "invincibles" and the "lost generation." Today's young American adults have had to endure one of the worst recessions in 70 years and then watch as their futures seemingly evaporate before them.

Many are educated, stuck in dead-end jobs or unemployed, living with their parents and seeking government assistance.

"If these persons are not quickly reconnected with the economy and the workforce, we are truly looking at a lost generation in terms of upward mobility and productivity," said Joe Minarik, director of research for the Committee for Economic Development, a nonprofit, public policy research group.

A recent report by the Federal Reserve Bank of New York sheds some light on just how severe the jobs crisis is for young adults.

Using Census data, the researchers found that the percentage of unemployed young adults—currently about twice the national average—and those who are underemployed or working in jobs that don't require the degrees they hold, has risen steadily since the 2001 recession.

Research indicates that through 2012, about 44 percent of young, working college graduates were underemployed and the quality of jobs held by those underemployed has declined, with today's recent graduates increasingly accepting low wage jobs or part-time work, sometimes pushing other low-skilled workers out of the labor market.

The youth jobs crisis is costing the U.S. economy and may continue to do so for years, further hindering this generation's ability to contribute to economic growth.

One report from a youth advocacy group called the Young Invincibles, measuring only lowered tax revenue and safety net costs, found that high unemployment among millennials, ages 18-34, costs the U.S. more than $25 billion annually. And jobless rates for millennials have been in double digits for nearly six years with the youngest among them, ages 16-24, experiencing the highest rate at 15 percent.

Other studies put the cost of youth unemployment at several hundred million dollars a year. Experts say this trend could undo many gains of the economic recovery. "At a time of tight budgets when we're already trying to recover from the recession and invest in things like education, … having so many people out of work, we're really shooting ourselves in the foot here," said Rory O'Sullivan, Young Invincibles' policy director and chief author of the report. To be fair, higher unemployment and underemployment for young workers isn't unusual as they generally have a tougher time in the labor market because they're the least connected to the workforce. But some economists believe this is more than a cyclical labor trend.

Recent figures suggest there has been a reversal in demand for cognitive skills. A report published by the National Bureau of Economic Research found that since 2000, businesses have needed fewer people to perform high-tech jobs that initially drove the information economy. Hiring of college graduates sank after the information technology revolution of the 1990s reached maturity, according to the report. Demand for cognitive skills subsequently fell during the first decade of the 2000s, forcing college graduates farther down the occupational ladder. "The demand for this group is slowly going down, but we're also educating still more people, and so that makes the situation very difficult when you don't have a lot of demand," said Paul Beaudry, co-author of the report.

Nobody knows that situation better than 30-year-old Rachel Bolden-Kramer, who graduated from Harvard in 2006 with a major in social studies. After graduating, she started a nonprofit but lost funding within a year. She attempted to enter the labor market, but like many of her peers she did not have much luck. Bolden-Kramer eventually became a yoga and a so-called mindfulness instructor, moved to New York City and has been self-employed ever since. "That's kind of what kept me out of searching for jobs and continuing with the entrepreneur track. I didn't feel very encouraged by what other people, my peers, were finding with jobs. It didn't seem like they were getting much more of an advantage financially even if they found a job."

To make ends meet, Bolden-Kramer used food stamps. This experience inspired her to write what she calls a "food stamp cook book" that explains how to have a nutritious diet on a limited income. She is trying to get it published. "I have friends who are Ph.D. candidates that are food stamps eligible," she said, "or in medical school, or whatever it is, or just like brilliant 28-year-olds who are living in New York (where) rent is so high."

Don't blame it all on the recession

Contrary to popular belief, the data show that the jobs crisis cannot simply be ascribed to the Great Recession. 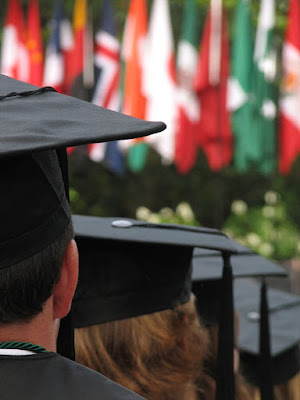 This presents a bleak outlook for this group of young workers who, according to economists, are already more likely to see permanent negative effects on their wages because they began their careers in a weak labor market.

"Once the larger economy is fully recovered from the after-effects of the Great Recession, this cohort will still be feeling the effects because the effects of entering the labor market during a downturn are severe and last a long time," said Heidi Shierholz, an economist for the Economic Policy Institute.

And it may be too late to reverse some of the policy and fiscal impacts of the jobs crisis for America's youth.

Recession-impacted millennials tend to believe that success in life was more a matter of luck than hard work, according to a study from UCLA Anderson School of Management economist Paola Giuliano and International Monetary Fund advisor Antonio Spilimbergo.

"This can make them less entrepreneurial," Giuliano said. "Perhaps as a result of believing that luck is important, they also want more government intervention in the economy."

This doesn't mean college students should just drop out of school and graduates should burn their degrees.

New York Fed researchers also found that while the labor market is much worse for young people who do not have a college degree, college graduates as a whole fare the best, experiencing unemployment rates at about half the rate of all workers, though unemployment was consistently higher for recent graduates, ages 22-27.

Certain majors, especially those in fields providing technical training such as engineering or math and computers or those geared toward growing parts of the economy such as education and health, have also done relatively well.

That, however, does not account for the huge remainder of young adults in other fields with bleak prospects and mounds of debt, which economists believe could be a huge drag on the economy for years to come.